What are the different numbering options in Advance Steel?

Numbering in Advance Steel
Prefix settings
Define the prefix settings in the following dialog box of the _AstM5PrefixConfigurationExplorer command.

Selecting "Use prefix" will activate the prefix settings.

The first 3 numbering methods assign fixed numbers to the objects. There will not be a link between the assigned element number and the drawing the piece is detailed on.

The numbering methods "With drawing number..." assign first an "internal" number to each object. During the detail creation the internal number will be changed to the drawing number the piece is detailed on.

Important: First detail the single parts and then the assembly parts. 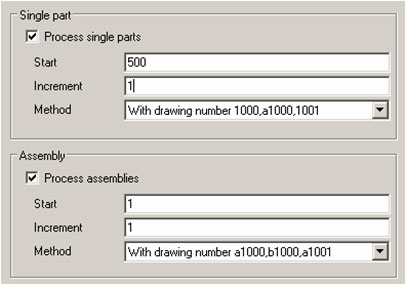 Each object in Advance Steel has two part marks, a Single Part number and an Assembly Part number.
The numbering will detect identical pieces and will assign the same piece mark to them.

The numbering can be performed for both, single part and assembly, in one step by selecting the two check boxes. 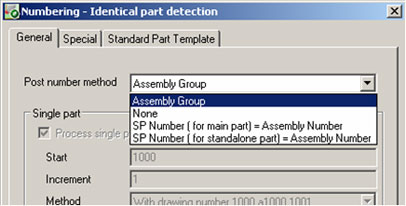 None:
No special setting and the numbering works as in previous Versions of Advance Steel

SP Number (for standalone part) = Assembly Number:
Assembly pieces, which have nothing welded to them in shop, will get the same piece mark as the single part and assembly number.
This applies only to the standalone pieces, not to other assembly pieces.

For example, an attached plate of Column C1 gets the piece mark pa - C1.
Important: First detail the assembly parts and then the single parts. 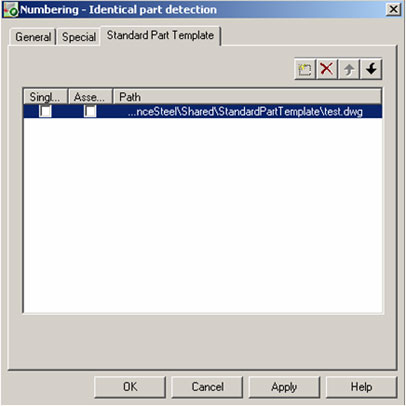 How to create a standard part template

Simply copy the elements from you project into a new dwg file; set the model role of the pieces to "none" and define the required piece mark.

Post numbering solution
Counter
The counter can be modified in:
AstorBase.mdb - > IncrementalCounter

Important:
To create the link between the single part and the assembly you have to modify the "SPTemplate" column. For example, "~CounterStrLC--%PreMPNr" = [counter] [separator] [assembly number].