You’re offline. This is a read only version of the page.
Url:/downloads/Documentation/

How is the rigid diaphragm behavior of slabs simulated?
Print

The model used in the following example is a GF + 3F building with floors modeled from slabs, main beams and secondary beams. This demonstration is meant to explain how to obtain through 3D modeling the rigid diaphragm behavior of slabs. 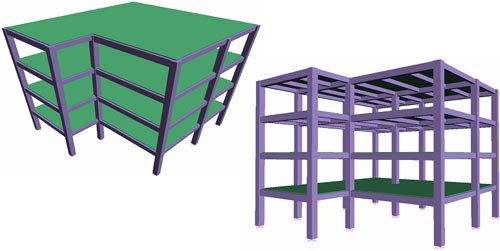 For a 3D model analysis taking the slabs behavior based on the rigid diaphragm theory into account, the structure modeling must respect the following conditions:

1. Beams. For a correct determination of efforts and of theoretical reinforcement areas, the cross sections definition must take into account the active width of the slab bp:

2. Slabs. The planar element type must be defined as "membrane".

3. Load distributions (loads due to self weight, live loads etc)

If a load distribution based on finite element analysis is not required, but a theoretical load distribution (based on a 45 degrees span direction) is needed, then windwalls must be defined in the slab plane. Windwalls are planar elements with no structural weight, which are not taken into account in the structural analysis. The only function of windwalls is to discharge the gravitational loads on the supporting elements (the main and secondary beams).

For a load distribution using windwalls, the planar elements (the slabs) must be defined as non-supporting elements; the only purpose of slabs is to take and distribute the horizontal forces (due to earthquake, wind etc).

Therefore, after the finite element analyses, the following results are obtained: