How are semi rigid connections on linear elements created?
Print

EN 1993-1-8:2005, chapter 5.2.2.4 Semi-rigid joints are described as "a joint which does not meet the criteria for a rigid joint or a nominally pinned joint should be classified as a semi-rigid joint." 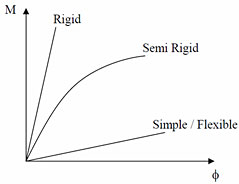 In structural analyses, some assumptions are considered for simplicity in the design phase. Beam-to-column connections are assumed either perfectly pinned or fully rigid in most designs of steel frames. This simplification may lead to an incorrect estimation of frame behavior. In fact, the connections behave between these two extreme conditions and possess some rotational stiffness.

To achieve a more accurate analysis of a structure it would be advantageous to include the non-ideal connections. For example, if we compare a beam with hinged, semi-rigid, and fixed joints subjected to a uniform distributed force p (force/unit length) there will be a substantial variation in the distribution of bending moment (see Figure 2).

Figure 2. Moment Diagrams for a beam subjected to uniform loading

Consider a frame with the base restrained on all directions and a uniform distributed load p = 1kN/m (Fz from the following figure) applied only on a beam. Columns are IPE400, the beam is IPE300; all members are made of steel S355. 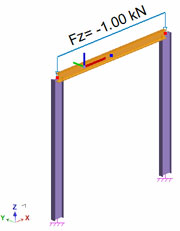 Elastic releases (for semi rigid beam) are defined as shown below. Considering that we will perform a static linear analysis, the value entered for the abscissas represents the rotation at the elastic limit and the value entered for ordinates represents the initial rotational stiffness. These values are determined based on how the joint is configured. For this example we will affect only the rotational stiffness about the y-axis. 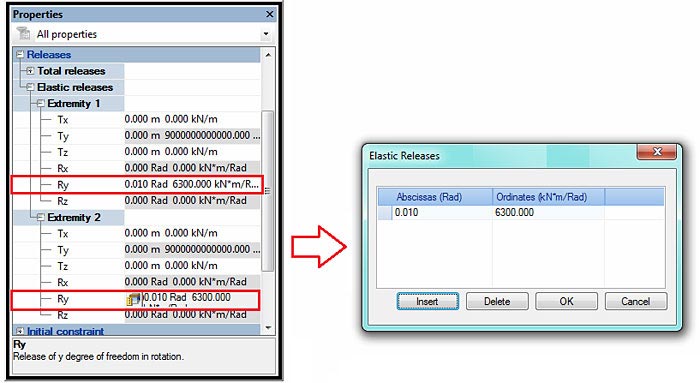 The following table presents the results obtained for a frame with a hinged beam, semi-rigid beam, and fixed beam. 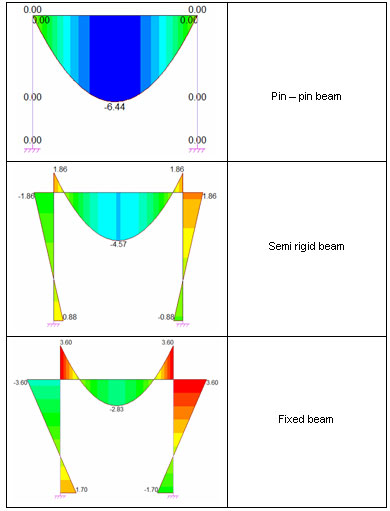 As it can be seen that there is a substantial variation in the distribution of bending moment.