How is a nonlinear analysis created?
Print

Using Advance Design you can create a geometric nonlinear static analysis meaning that all the loads under which the structure is subjected can be only static loads and the force-displacement relation is nonlinear. There are situations where the structures under exterior loads can be subjected to large displacements. In the nonlinear analysis properties window there is the option to take into consideration large displacements. In these conditions loss of general stability can be experienced but remember that the material is still in the elastic domain.

Next, a simple example will be presented of a geometric nonlinear analysis (considering second order effects) for a column subjected to axial force and moment. 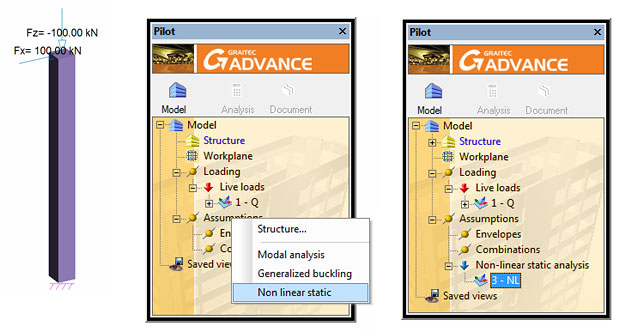 The structural system will be defined will all loads and in the Pilot a nonlinear analysis will be created by right clicking on Assumptions and from the context menu selecting Non linear static.

Next select the newly created nonlinear static analysis and in the properties window select the large displacements option to activate it. 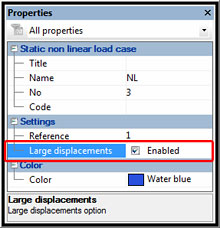 Next to Reference, in the Analysis options field, click on the properties button. 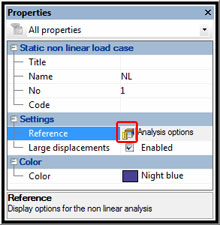 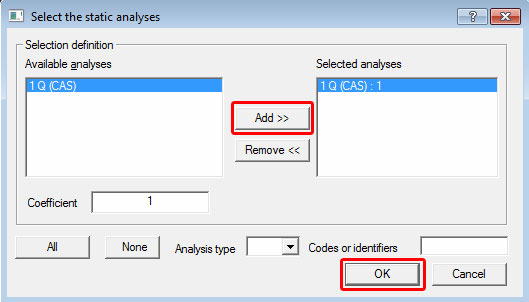 Select the load case/combination from the left side of the window and click Add, validate the selection with OK.

After the addition of the static load cases, the nonlinear analysis properties can be customized depending on each structural model defined. There are cases when the structural models can be unstable with the values for displacements, forces and energy not converging. For these cases some properties of the analysis must be modified either for the step numbers, iterations or the convergence values going all the way to modifying the structural model at the identified unstable areas.

Identifier - name - in this field the load case/combination that is going to be analyzed is displayed; only combinations and load cases that do not include seismic load cases can be added.

Coefficient - the coefficient (intensity) of the load case/combination can be modified directly from this field in order to not create new combinations with different coefficients or new load cases with loads having different intensity.

Number - this column represents the number of steps that will be included in the analysis of the corresponding load case. If the structural model is a complex one in which cable elements are defined, the step number must be increased until the results will converge to limit values; by increasing the step number, the analysis time will increase considerably.

Iterations by step - each step will be partitioned in a series of iterations. The convergence criteria will also be verified and if the structural model is stable, the number of required iterations will not reach the maximum (50). The analysis will automatically jump to the next step when the convergence is satisfied. 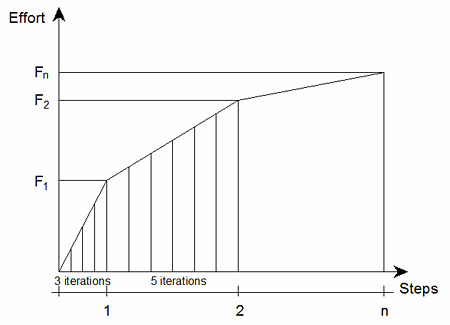 In the following figure, two different analyses can be observed, in the first case (left) a nonlinear analysis is performed with the default values for iterations by step (50) and on the third iteration the values are convergent and it can automatically jump to the next step. 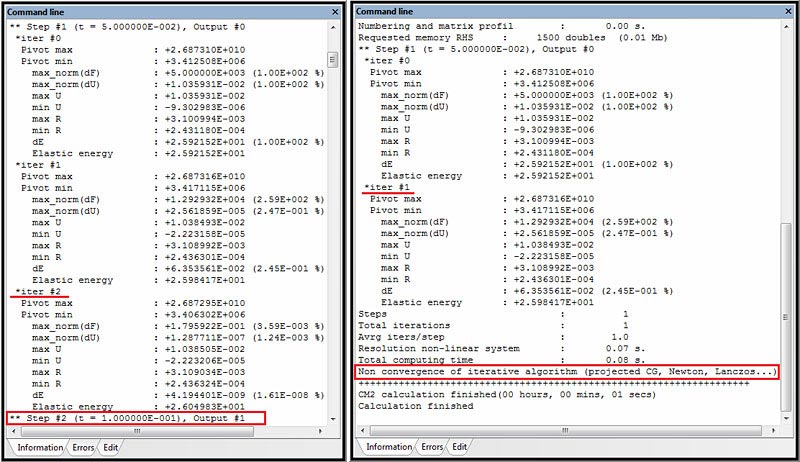 In the second case (right) two iterations per step were defined which resulted in a convergence error of the iterative algorithm after the second iteration and it resulted in stopping the analysis and showing an error.

The number of iterations by step will be modified depending on the convergence speed and the iterative method (Advance Design uses the Newton - Raphson (complete) or Quasi - Newton methods).

Stabilize iterations - if there are zones with large nonlinearity a stabilization algorithm of the results is used and iterations are stabilized up to this iteration number (in each step); this option is useful mostly if a structural model contains linear elements having cable properties.

When the auto stabilization algorithm is not needed the value 1 is used in this field.

Last - at the end of the analysis the results will be showed only for the last step.

Complete - for each step the results will be saved and can be viewed at the end of the analysis. Selecting this option and having a large number of steps will considerably increase the analysis time.

Update stiffness - Mode - the method used for computation can be selected from the drop-down list.

None - the rigidity matrix will remain unchanged and the calculation will be done with the initial rigidity matrix but this means that it will result in a static linear analysis.

Complete - a method that uses the tangent rigidity matrix is used (Newton-Raphson method) and the principal is to implement an iterative process of static equilibrium and thus finding a sequence of steps that satisfy the equilibrium relation.


- The advantage of the method is that by using the tangent rigidity matrix and adopting an incremental iterative method the number of calculation steps is reduced.

- The rigidity matrix will be updated either for each iteration (Period = 1) or for an interval of iterations (Period > 1).

- The rigidity matrix will be updated either for each step (Period = 1) or for an interval of steps (Period > 1).

The methods used for nonlinear calculus applied in the finite element method have the disadvantage that in the areas of large nonlinearity, the tangent to force-displacement diagram will become almost horizontal and then the result values will diverge.

Period - defines the update rate of the rigidity matrix at steps/iterations where the value 1 is used for each step/iteration (depending on the algorithm of the matrix update):

Convergence - the solver engine will evaluate by iterations for each step of the analysis until the equilibrium is reached; this happens when the result error value (force, energy, displacement) is smaller than the tolerance convergence.

In the following figures, the different results of displacements and forces between a static linear and nonlinear analysis, are presented. 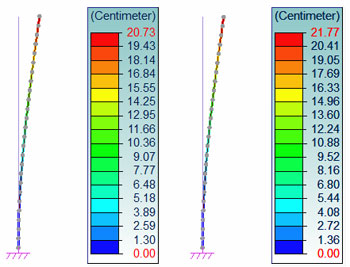 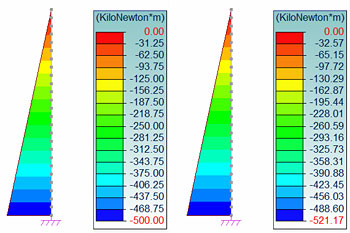 Notice the increase of 5% for displacements and 4% for forces by using a nonlinear analysis. Even though the differences are small, one has to take into consideration that this is a simple example with only one element and having a small height; when a nonlinear analysis is performed on a larger structure the differences could increase until the verifications are no longer verified.